The cinematic platformer genre has a distinguished and well-documented history, but considering the limitations of the hardware in the years of the genre’s biggest breakthrough titles really puts things in perspective. The way pioneering game designers such as Jordan Mechner and Eric Chahi were able to squeeze incredible results from the hardware of the day and produce memorable cinematic experiences that captured our imaginations is a true testament to the developers’ ingenuity. But unlike Karateka, Prince of Persia, Another World and Flashback, few people ever mention The Eternal Castle.

It turns out there’s a very good reason; despite what clever marketing ploys may lead you to believe, the game never existed back in 1987. Even so, from the very first time you boot the game on your Switch and are presented with a faux MS-DOS prompt changing directories, loading resources and executing “ETERNAL.EXE”, the nostalgia trap is already well set, ensnaring unsuspecting players not in a remaster but instead in a brand new cinematic platformer, which also happens to be one of the finest ever made. 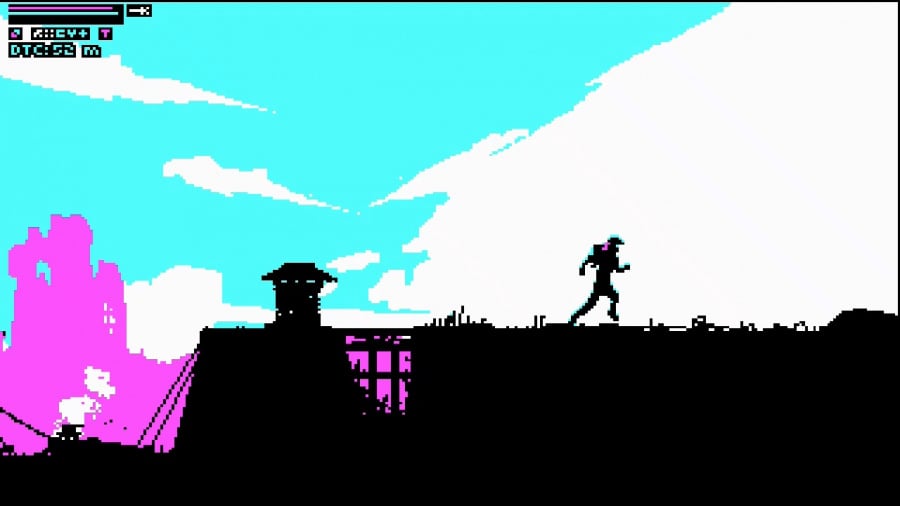 Considering the amount of processing power current day hardware provides, it must have been tempting for the small team producing the game to go overboard with features and thus jeopardising one of the elements that made most of these experiences memorable in the past: the minimalist approach that let the player use their imagination to connect the dots in their mind – something we often had to do three decades ago, but not so much nowadays. Their commitment to pay homage to those early days of gaming raises The Eternal Castle [Remastered] way above the mark of faux-retro quick nostalgia grabs and in fact creates an experience that can easily stands on its own laurels.

In the very beginning the player is given the option to play as Adam or Eve, effectively deciding on the gender of your humanoid avatar. Things quickly go haywire as your planetary reentry is greeted with surface fire that damages your ship and forces your avatar to eject. You first take control hanging from a parachute on a tree. This prologue mini-level is in fact a cleverly designed tutorial, something one would most certainly not find in a 1987 MS-DOS game.

Your avatar’s skill puts legendary heroes like the Prince, Lester and Conrad to shame. Players will feel quite at home with the available parkour options but will probably be surprised by the versatility of the fighting mechanics. Not only are you able to perform several combos of punches and kicks from a varied number of stances (including when you’re knocked on the ground), you also get the option to equip up to two weapons, including a variety of melee weapons and a small selection of firearms with limited ammo. However in order to balance the game, a Dark Souls-style stamina bar has been added, which means you can’t quite go running around throwing haymakers and jump kicks as often as you might like. Doing so runs the risk of needing to take a breather mid-action sequence or boss fight that might end up in your untimely demise. Progress, however, is rarely lost in your first playthrough thanks to several well-placed checkpoints, preventing frustration from settling in. 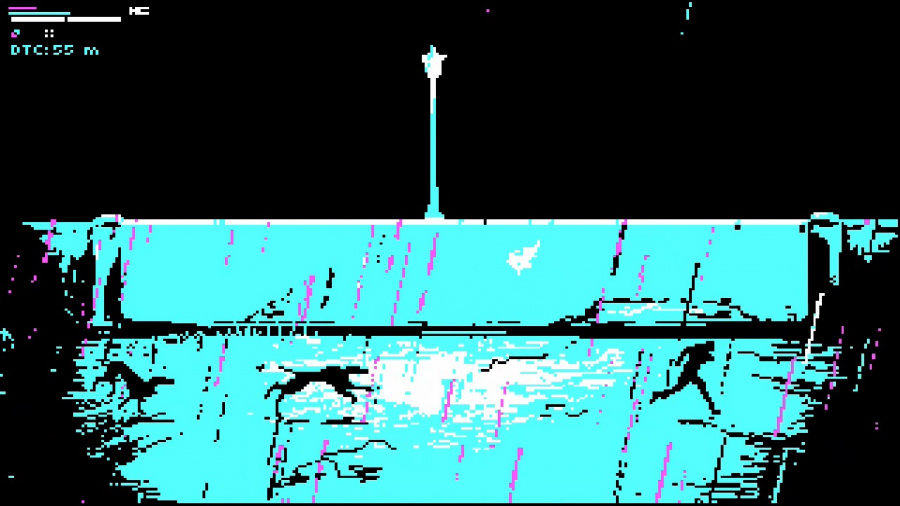 Once you are reunited with your damaged ship, the real game opens up with a choice of three areas: the Unholy Church, the Forgotten City and the Ancient Ruins. Each area challenges you with unique puzzling, platforming and combat sequences. It is truly astonishing the amount of diversity the game throws at you before you eventually gather all the parts needed to fix your ship and venture towards the game’s inevitable climax in the titular Eternal Castle.

You may have already guessed it from the still images that accompany this review, but the entire game is presented in 2-bit CGA colour. There is no single portion of the game that uses more than four colours on screen, relying on clever sprite outlining techniques to fake light reflections and other such ingenious visual trickery that ensure you never lose sight of your avatar among the minimalist apocalyptic backgrounds or darkest caves you visit. What those images do not convey is the amount of rotoscoped animation frames each protagonist boasts, transforming lumps of pixels into life-like humanoid figures that move, fight, and stumble to the ground like real humans. Of course, that the devs took some technical liberties (like the game’s widescreen aspect ratio, no sprite limits and the pleasant addition of a two player-co-op mode) means that you may have to fend off a mob of twenty enemies all coming at you at once in a single screen – something that would not have been feasible on hardware from three decades ago. 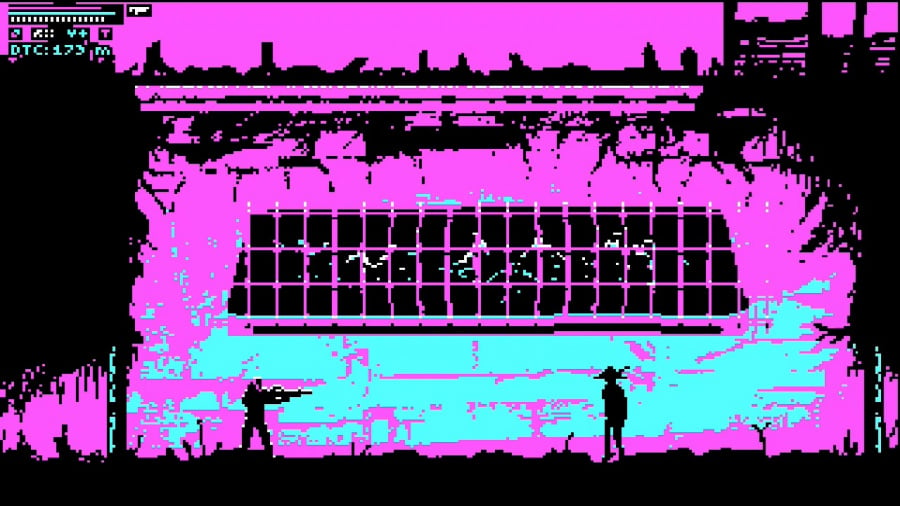 As we’ve said, The Eternal Castle is a visual treat but fear not for your ears, either, because the soundtrack is mercifully not made up of internal PC speaker bleeps and bloops. While good chunks of the adventure are presented in eerie silence, when the action picks up so do the synthwave beats and pad-laden sci-fi audio landscapes provided by Kiiro. One would think that 2-bit colours and Red Book audio would not mix properly but, in fact, they compliment each other perfectly. Look (or listen) no further than the rooftop chase sequence in the Forgotten City for a great example of this unexpected collision of worlds.

We are truly hard-pressed to find faults with this one. An averagely skilled player will have completed the whole game in about two and a half hours, but despite the apparent linearity of the adventure it is impossible to see everything in a single run. Not only there are cleverly disguised branching paths depending on your success at certain points in the game, but starting to explore off the beaten path will reward the player with several permanent power-ups that not only give a boost to your initial stats, but provide your avatars with distinguishable visual add-ons. There is also some unexpected replay value thanks to the need to find all thirty tokens in order to unlock the true ending, the secret two-player arena versus battle mode and the truly challenging single-life permadeath mode. Sometimes the combat gets a bit clunky, perhaps, but is that a true fault or an endearing homage to the trademark clunkiness of the games it’s inspired by? 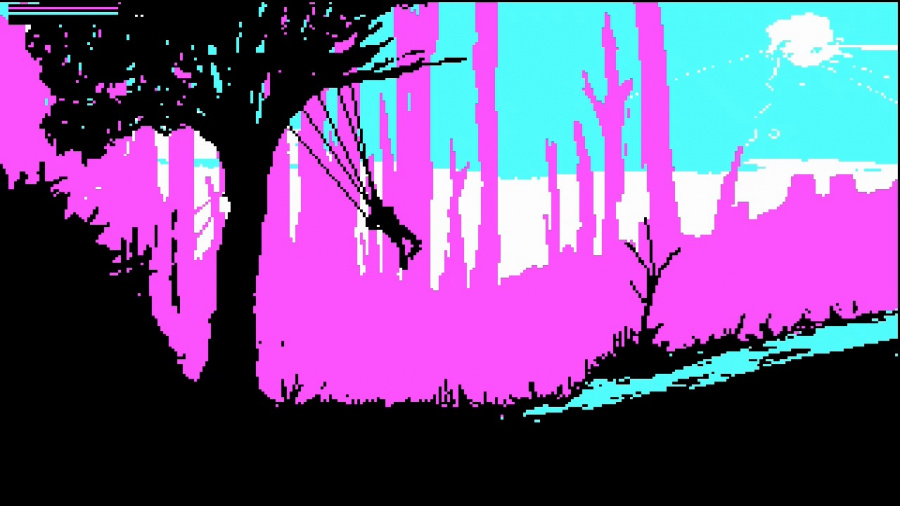 It’s tough to say, and your mileage will vary depending on your love for those games. What really threw us off, though, were the mid-level loading times that break the immersion, something that seemed absent from the 2019 initial PC release and that we hope to see patched in the near future. We also understand if younger players (perhaps) fail to see the appeal of this particular brand of ‘archaic’ game design, this one is aimed at a niche audience of a certain age who understands exactly what the producers were aiming for.

The Eternal Castle [REMASTERED] is a neo-retro masterpiece. Even if you play the game from start to finish just once in a single sitting and never come back to it, this minimalist post-apocalyptic epic will stay with you for years to come. If you already have Another World and Flashback in your Switch collection and are looking for the next true evolution of the genre, look no further. They just don’t make them like this any more… and we found ourselves wondering ‘why not?’.