INTERACTIVE ENCYCLOPEDIA Little Mouse’s Encyclopedia is ideal for born explorers. Wandering across the full of life boards, you’ll discover animals and vegetation by your self. Utilizing a magnifying glass, you’ll be able to reveal playing cards that include attention-grabbing info and drawings. GEORGEUS ILLUSTRATIONS The graphic model of...

After diving into the unmitigated disaster that is Bounty Battle just recently, we can’t say we were particularly enamoured with the idea of slogging our way through yet another Smash Bros.-esque indie fighting effort quite so soon. However, Rivals of Aether is an experience that’s just about as far removed from that mess as is perhaps possible within (or without) the confines of a genre. Here is a carefully crafted, deep and addictive 16-bit platform fighter that takes the base influence of Nintendo’s brawling behemoth and runs off in its own direction, resulting in a brawler that cuts away a lot of faff and theatre and gets down to some surprisingly hardcore and competitive business.

The land of Aether, in which Dan Fornace’s game is set, is divided into warring civilizations of animal fighters who’ve been tricked into facing off against each other by a shadowy Lovecraftian fiend. Taking place over six stages – and one hidden final battle – which introduce the original core characters that were available to players back when the game first released in 2017, the story mode here is a short and simple affair which nevertheless does a decent job of setting the scene and providing a little background to the cast’s motivations for kicking each other’s pans in. That six-strong cast has also now been expanded to a total of fourteen pugilists, twelve from across the land of Aether itself as well as two delightful cameos in the form of Ori and the legend that is Shovel Knight. 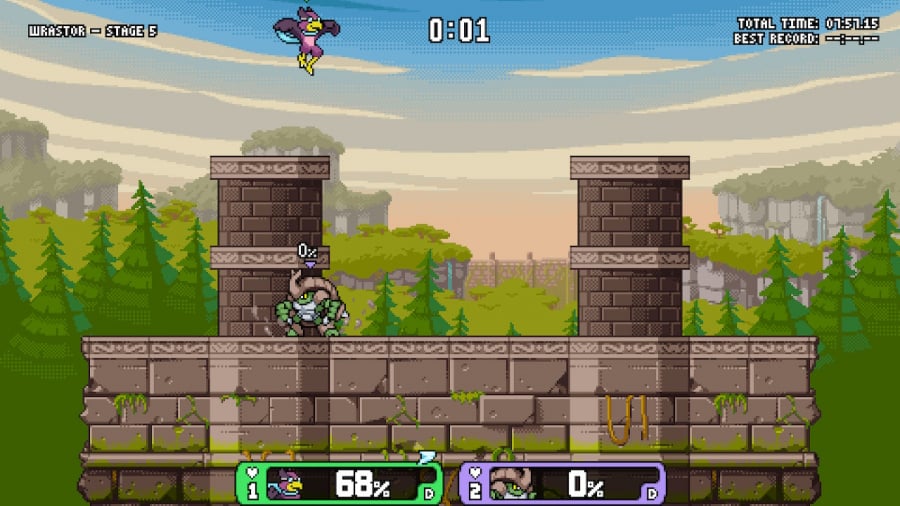 There may not be a roster of several thousand instantly recognisable characters to choose from, then, but the fourteen furries on offer here are a well-designed and diverse bunch, each with their own unique elemental attacks and specials which can be used not only to punish opponents, but also to cleverly affect the arenas in which they are fighting. Pulling their powers from four elements – earth, air, fire and water – your protagonists all work with the same base move-set of light combo attacks and chargeable strong attacks, all of which have variations depending on the direction you’re holding, alongside rolls, dodges, parries and a double jump.

Add to this each character’s unique abilities and there’s a surprising amount to get to grips with in order to master any one of them. Zetterburn, as an example, can set foes alight, place pools of flame around the arena and does extra damage to an enemy when they are burning, whereas Orcane places puddles of water on the ground which he can then teleport to or turn into pillars of bubbles that trap enemies in the air for an easy upper attack. There are slow, powerful fighters here, zippy lightning-based ninja-types and everything else in-between to suit your preferred playstyle, and each and every one of them is a delight to invest time in. 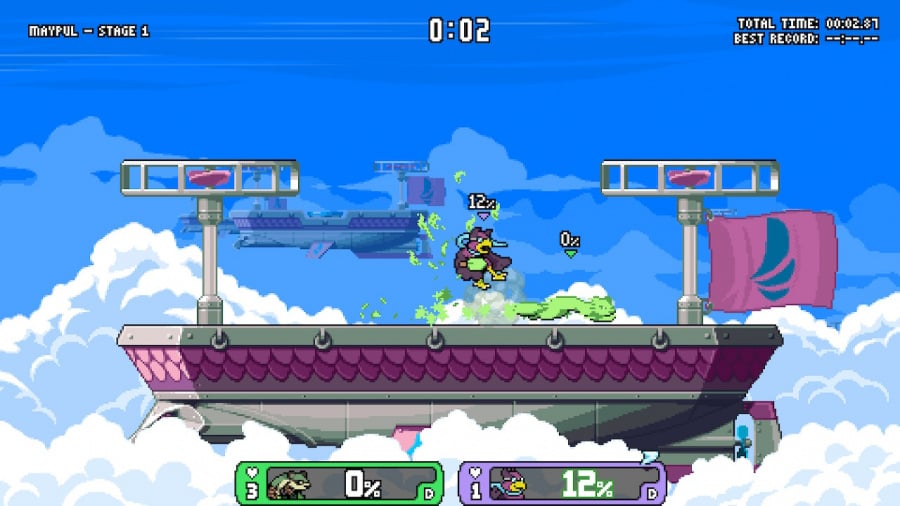 Even those guest fighters, Ori and Shovel Knight, have very obviously had a ton of time and effort put into their design. Shovel Knight can perform his signature shovel drop attack, knocks collectable gems out of opponents, sits down to fish mid-fight and even uses his taunt to open a shop in order to purchase relics and armour to help him in battle.

In short, the relatively small roster, alongside the removal of a lot of the more overblown aspects of Super Smash Bros., the almost simplistically clean presentation here, belies a ton of depth more suited to dedicated fight fans than those who just want to party casually with pals. This depth is also hinted at in a tutorial mode that drills you in every aspect of the game, from the very basics right up to an individual’s strengths and weaknesses. The robust practice mode also allows you to track frame data and displays hitbox visualisations in order for you to really get down into the nitty-gritty of it all. 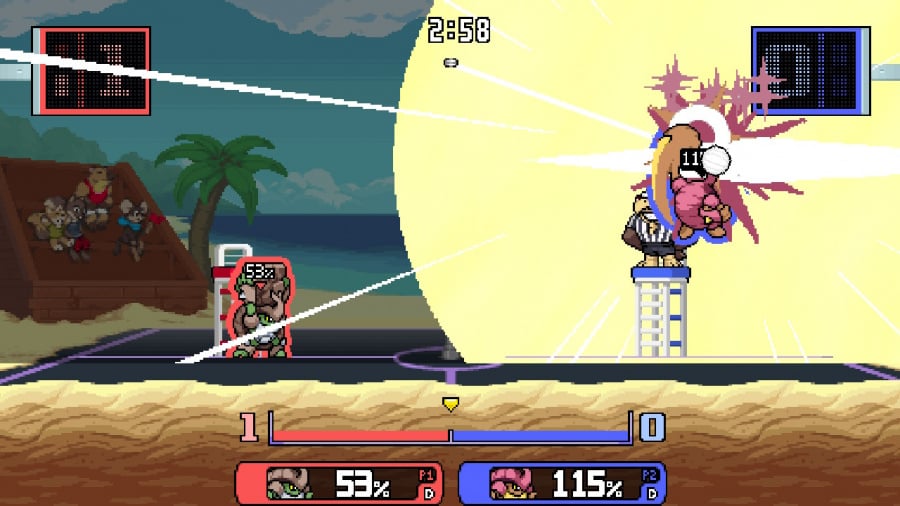 While Rivals of Aether absolutely and unashamedly borrows its base concept from Smash Bros. – you’ll battle it out in 1v1, 2v2 or 4 player free-for-alls that see you batter opponents, raising their damage percentage before punting them off the screen for a win – there’s a surprisingly different feel owing to what this game has very cleverly cut away from and added to that classic Smash setup.

In terms of content, this Switch port is, unfortunately, missing the never-ending conveyor belt of fun that’s pumped out via Steam Workshop on PC, with players there having an unending parade of new characters and stages created by dedicated fans to delve into. It’s a real shame to be missing out on this standout aspect of things, even if it is completely understandable from a technical point of view.

However, there’s still a reasonably meaty suite of modes here for Switch players with Rivals of Aether’s story bolstered by Versus matches where you can face off against the CPU or set up tourneys with up to three other players, an endless Abyss mode and a surprisingly fun tetherball diversion. It all adds up to plenty to do for those who don’t wish to take things online and get down to ferocious battling against human foes, however, make no mistake, this is a game that’s all about taking things online and it’s here that this Switch version currently comes a bit of cropper at this moment in time. 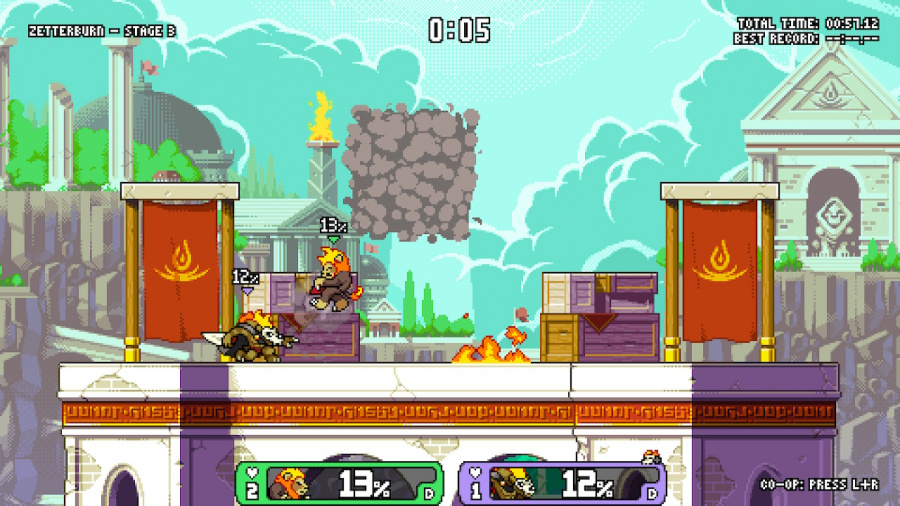 Where Rivals of Aether performs absolutely flawlessly in both docked and handheld modes, looking crisp and clear and with a smooth 60fps at all times when playing solo or against friends locally, the online element of things is currently a bit of a mess. We struggled over our first few days with the game to find anyone to fight against in the online component’s casual or ranked modes – not a good sign within the first week of a game’s release – and, when we did find an opponent, things were often a bit of a lag-fest. This has, thankfully, been remedied somewhat since with the two patches that have dropped already, the last of which certainly helped in terms of that lag. However, this game really needs players; it needs a busy community in order to thrive and right now it’s not particularly easy to find a match online – whether that’s through a lack of players or technical issues, we’re not 100% sure.

However, if Rivals of Aether can sort its technical problems out and get so that jumping into a match online doesn’t incur a long wait, this is absolutely a platform fighter that can stand shoulder to shoulder with its most obvious inspiration, providing a more hardcore and competitive alternative to the casual party vibe of Smash. This really is one of the very best entries in its genre that we’ve played and if it sorts out its current woes, you can feel free to easily add another point to the score below.

Rivals of Aether is a deep and addictive platform fighter that borrows its base concepts from Super Smash Bros. and then runs off in its own direction, resulting in a surprisingly complex indie alternative to Nintendo’s brawling behemoth. There’s a fantastic roster of characters here each with their own special moves and unique abilities to dig into, every one of which is wonderfully animated in the game’s crisp and clean 16-bit graphical style. Solo and local party play are well served with a bevvy of fun and flexible modes for up to four players and, if the developer can get the currently problematic online aspects of things in order, this all amounts to a game that can stand shoulder to shoulder with Smash or any other platform fighter we’ve played on Switch thus far.