It’s obvious and often jarring when you realise that a game you’re playing on your Switch is clearly designed for the simple taps and swipes of a mobile phone. Nintendo’s handheld does have touch screen support, yes, but it’s so underused (with exceptions, such as Anthill) that when a game like Linn: Path of Orchards comes along, it’s downright strange. This game was obviously designed for phones, and there’s nothing wrong with that, but there’s a world of difference between phone and non-phone games, as much as the industry might prefer otherwise. We wouldn’t want to play Super Mario Odyssey on a phone, and we don’t particularly like playing Linn: Path of Orchards on the Switch.

It’s obviously not intended for button controls, and we felt disconnected from our inputs much of the time we spent playing. It just feels wrong, which is the last thing you want any game to do. Before even getting into the nuts and bolts of the gameplay, before you even understand what’s going on, you feel an overwhelming ennui towards the proceedings. Getting stuck in doesn’t really mitigate this. 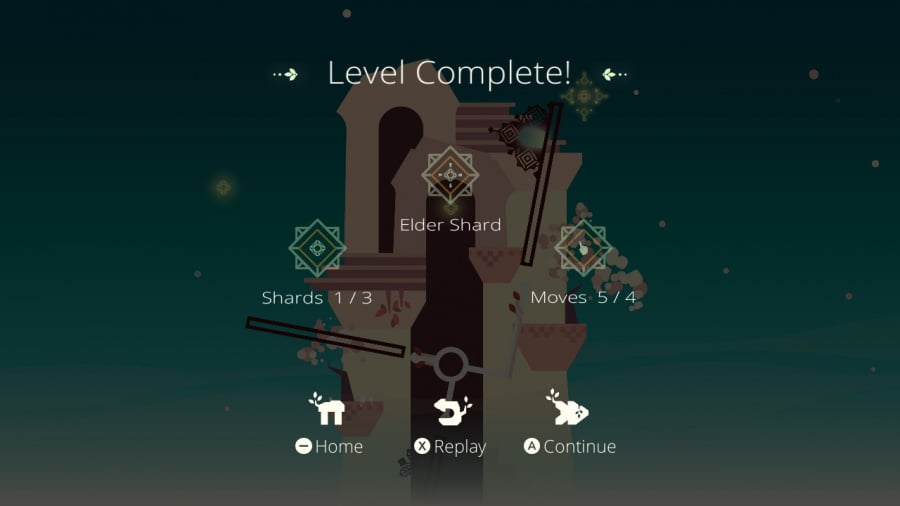 So what do you do? Well, it’s an auto-running single-screen platform game where the area you’re navigating spins, shifts and swings around you. All you do is press a button to begin moving forward, and tap left or right to turn around or dash through the air where necessary. In practice, this usually means you can move Linn from the start of a level to the end in a matter of a few seconds – three, maybe four. Of course, you’ve got to account for your first attempt, wherein you won’t know which way to stage will be rotating and will simply die unless you get lucky.

Each stage has multiple goals to complete, which can be done all at once or piecemeal if you prefer. There are collectables to grab and conditions to adhere to – spend a certain amount of time in the air, or on the ground. Make it to the exit in as few moves as possible. Nothing electric, but enough to make you look at the levels differently in each case.

These additional goals are appreciated, but also in part mandatory as at set points the game will prevent you from progressing until you achieve a certain number of said objectives, which is a little frustrating but at least forces the player to re-examine the levels. Given how utterly straightforward they are on a traditional pass-through, this is really the only way to wring any kind of intrigue out of Path of Orchards, for the additional minute or so you spend figuring out how to read the collectables, then the further minute you spend wrestling with the controls to execute said plan. 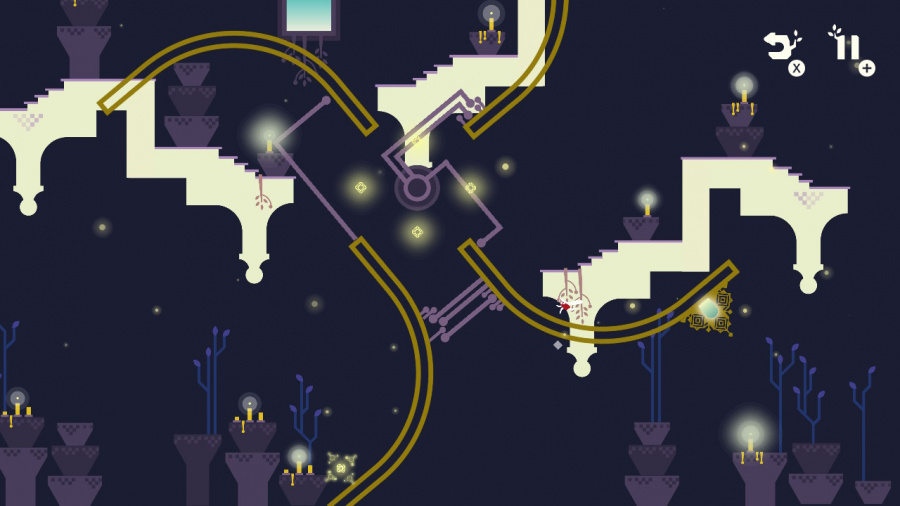 Unfortunately, nothing the game threw at us made it especially interesting, and while failure is barely punished – the level simply resets – many times it didn’t really feel like our fault. Whether or not you can use the double jump or dash, or even land on a platform at certain angles – it’s all very sticky and imprecise. Perhaps there’s some rhyme or reason to it that we can’t perceive, but many times during Path of Orchards we would enact a plan only to have the double jump fail us, or desperately mash the button as we missed a platform and find that – inexplicably – we were now able to vault onto it from mid-air. It feels far from mechanically polished.

And yet, it’s not a total write-off. As the game goes on we found ourselves getting used to the idiosyncratic (read: not very good) controls and level design, and to the game’s credit, it’s definitely visually striking, with the resting state of some of the later levels being downright pleasant to look at. The music and sounds are fine, too – serviceable, non-intrusive. They get the job done.

It’s generally quite atmospheric, which carries a lot of the experience when the gameplay is as stilted as this. It’s also undeniable that the bite-size nature of the levels propels you forward, and the UI between stages is extremely quick, as is the loading in general. Replaying stages for the additional goals adds a frisson of mobile game compulsiveness to the stew, but it’s ultimately just a distraction.

Linn: Path of Orchards looks and sounds fine, but it’s such a banal gameplay experience that we can’t recommend it in good conscience. It’s surprisingly slick, but said slickness is in service of a game that’s simultaneously completely unfair and far too easy. Unclear rules, unpredictable deaths and unacceptable controls make this an easy skip. There’s potential here, but it’s just too flawed to flourish. A sequel that’s built from the ground up for Switch could be something special, but for now, it’s a reluctant thumbs-down from us.