American Gods and Trickster upend the fantasy of magical households

What a difficult game to review. Yes, yes, you’re thinking. It must be so hard for you to review a well-received remake of a beloved classic. But, you see, it is, because Oddworld: New ‘n’ Tasty does so much wrong and is in many ways so utterly redundant that it’s difficult to keep a cool head when approaching it.

Here’s the thing; there was no reason to remake the original 1997 Oddworld: Abe’s Oddysee. At the time New ‘n’ Tasty originally launched (the halcyon days of 2014), its source material was widely available on PlayStation 3 and Steam. And it still is. But, no, folks wanted their Abe action to get some sort of spit-shine, so in comes New ‘n’ Tasty “fixing” everything that wasn’t broken and stripping the game of a good deal of its precision, atmosphere and general appeal.

Is it bad, then? Should we cut to the chase and just give it a low score? No, no, no. New ‘n’ Tasty doesn’t deserve that. It’s fun to play and the basic components that make Abe’s Oddysee so good are here. Some of the quality of life improvements are smart ones, most crucially the implementation of Abe’s Exoddus’ valuable “All o’ ya” command, which allows you to engage multiple Mudokons in Gamespeak at once, meaning no more painstakingly ferrying them back and forth one at a time. 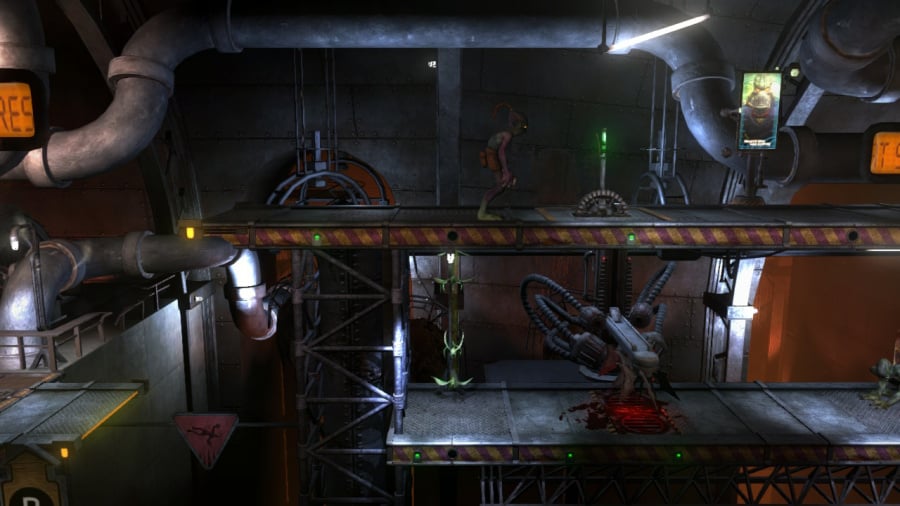 Gamespeak? What’s that? Whoops, we got ahead of ourselves. I suppose we ought to explain what Abe’s Oddysee is, or was, but quite frankly you should already know and shame on you if you don’t. A cinematic platformer akin to the original Prince of Persia, the game took place in a flip-screen world with pre-rendered background environments, focusing on timing-critical action, tense stealth and light puzzle-solving. The widely-touted Gamespeak feature saw Abe able to command his fellow slave workers around using basic commands such as “Hello”, or “Follow me”. Simplistic, yes, but also fresh, exciting and organic. While the single-screen compositions were dated even in ’97, they served the action brilliantly, making each new area stick in the mind. It helped that it was (and still is) gorgeous.

And New ‘n’ Tasty is gorgeous, too. It looks fantastic in places, and the fidelity is enormously impressive even in handheld mode. Unfortunately, the same can’t be said for many other aspects of the game when compared to Oddysee. Adding full scrolling gameplay to the experience seems like a no-brainer, but without adapting the level design it leads to a game that feels markedly less carefully designed.

In the original, you’d encounter sleeping enemies you’d need to sneak past. The transition between screens was just that – a transition, and it would give you pause. You’d think, hang on, I have no idea what’s coming next, and you’d sneak onto the screen just in case there was a Slig in the land of nod. Here, you never know what’s coming up, so you could find yourself just running headlong into a situation that you’re not prepared for in the slightest. The screen divisions made each space stand alone; it made you, as a player, consider what you were faced with. Here, it’s all muddied by this simple change. Some of the level designs have been altered to account for this. Others, not so much. 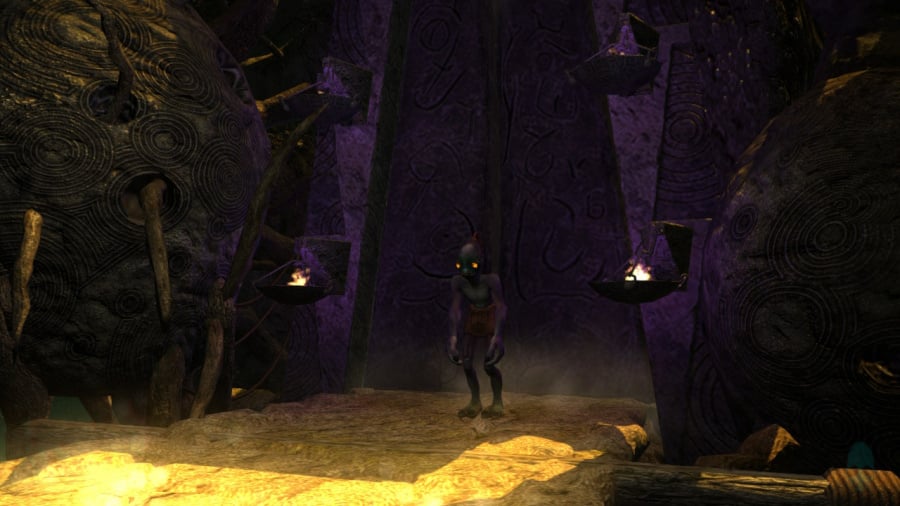 There’s also the animation – Abe seems much lighter and fleeter-of-foot here. The weight and energy of the original is gone. It’s not nearly as absorbing – you’re no longer at the mercy of a hostile world, you’re simply playing a game. More yammering, pointless dialogue has been added. The change of game feel has rendered some sections ridiculously trivial, others far harder. A quicksave feature has been added, but when you die it loads your last checkpoint rather than your last save. Abe’s Exoddus got that part right in 1998.

But we could be negative all day long if we focus on the minutiae, if we consistently compare this remake to its inspiration. As a game, New ‘n’ Tasty is good. Better than good, in fact. It’s a lot of fun, still, and if you’re not familiar with the original Abe’s Oddysee, it’s going to impress. The level design is still good, there’s still atmosphere here (though far less), the controls are slick enough and the multiple difficulty levels a sensible concession – though only the hardest mode is really worth playing, frankly, as this game was never that difficult in the first place.

It’s good because Abe’s Oddysee was good, but that’s the only reason. And that may seem petty, but really, why remake a game only to strip it of precision and atmosphere like this? What’s the point, ultimately? A nice port of Oddysee and Exoddus would have been far more desirable, and their “limitations” barely register today in a world where even more “primitive” indie titles have been wholeheartedly embraced. Abe’s Oddysee hasn’t aged, and this is a less good version of it. But it’s a less good version of a great game, and it looks and runs great, so it’s still plenty of fun. Just… why?

We realise it’s not a popular outlook. Games should generally be appreciated for what they are rather than blasted for what they’re not, but that’s very difficult to do in this case. New ‘n’ Tasty is an acceptable imitation of Abe’s Oddysee, but nothing more. It has its moments of inspiration – the Stockyards stage is so beautifully realised that it can momentarily trigger that “this is what I remember the original looking like!” false memory – but it’s not enough to make up for the frustrations that come from the many, many unnecessary changes. Even the sound of Abe’s chant, which once sounded mystical and otherworldly, now just sounds like babbling. We’re very torn. As this is the only way to play Abe’s Oddysee on Switch, we begrudgingly recommend it. But we do so with our arms folded, and pouting. Harrumph.